It’s another holiday for us! Does anyone know the reason why today is the day-off?

Today is the 57th anniversary of Cambodian independence and it’s the special day that all Cambodians will never forget. 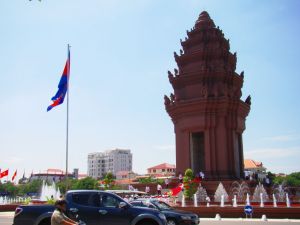 Cambodia was under protectorate of France from 1863 to 1953 and King Norodom Sihanouk, father of the nation, played an important role in gaining independent for Cambodia. On this day in 1953, he declared the country has independent from French colonial.

In 1958, the Independence Monument, a 20-meter tall, red-stone structure standing in the city center at the intersection of Norodom and Sihanouk Blvd., was inaugurated to commemorate the declaration of Cambodia’s independent from French colonial. It’s shaped is like a lotus and it was built in the Angkorian style. It consists of five levels with a hundred snake heads.