Some photos from TEDxPhnomPenh event

5 ways to drive visitors to your blog/website

Dara Saoyuth
How to?, Uncategorized

Numbers of blogs and websites keep increasing from day to day. Not many people visiting  can be a  frustrating thing for blog and website owners. There are plenty of way to improve your blog/website state, but I’d like to raise 5 main points for Student Blog visitors. I think some of you also own at least your personal blog, so let’s have a look together. Cheers,

Social network programs are very popularly nowadays especially Facebook, Twitter, Hi5, etc. In addition to having more friends online, you can improve your blog/website visitors by announcing it on these social programs. It is an easy way and you don’t have to pay for this. 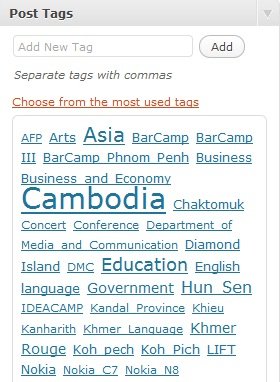 Wordpress allows you to put tag here / by: Dara Saoyuth

The Web is full of great content that will never be seen outside of the author’s screen because the writer has failed to understand that just a few simple tweaks in the blogging process can increase search-engine visibility.

You can improve search engine capacity by learning how to use tag including heading tag and title tag.

3. Create relationship with another sites 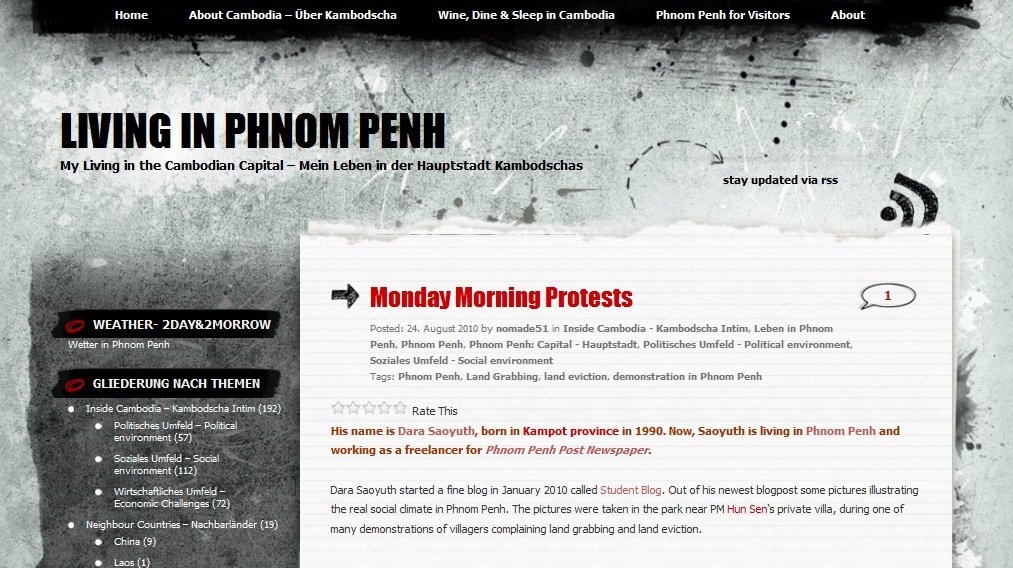 You cannot live alone on the earth and so as your website/blog that it cannot stay isolate on the internet world.

When you have more friends on the internet, you will have a big amount of visitors.

You can improve it by putting link to the other people’s website/blog and they will link you back. 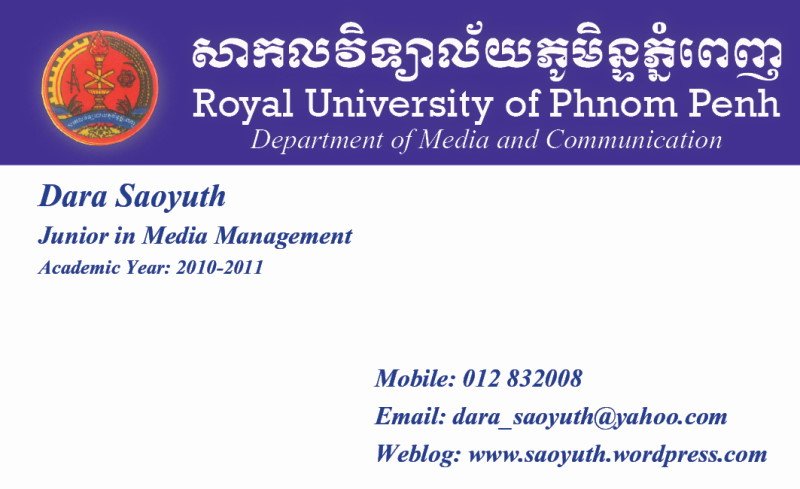 Another easy to make the other people know your blog/website  is to  deliver posters, business cards that include your web address to your friend or people you meet.

Those people will remember yours longer. You can also advertise it on newspaper or magazine. 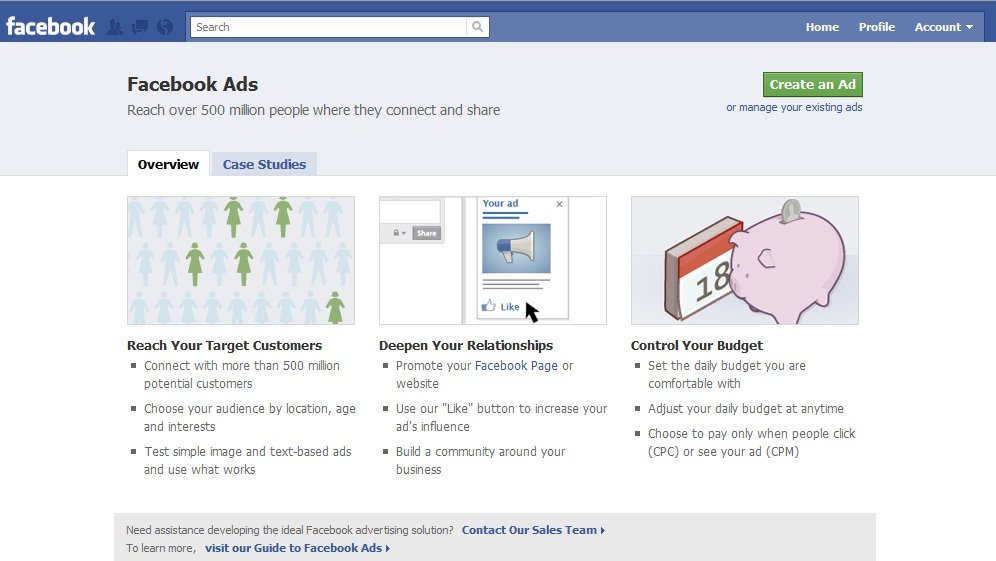 Well, if you have money, you should consider this method. You can buy space from other famous websites to put yours in them. Or you can use Facebook Ads or Google ads.

Should authorities be blamed on Koh Pich Issue?

We’ve just finished it as a radio course assignment and we’d like to share this piece with all of you. Cheers, 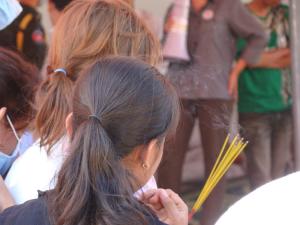 Relatives blessing for the deceased / by: Dara Saoyuth

Cue/Introduction: Diamond bridge stampede claimed some 350 people’s lives and injured hundreds last month, on the last day of water festival. Critics and a number of people have been complaining about the tragic incident. They put blame on the authorities for the reason that they have not managed the event well. However, some people have the ideas that no one should be blamed for the incident.

Our program is going to have commentary on the topic “Should the government be blamed for the incident?” Our commentators Sun Narin and Dara Saoyuth will express their point of view on the issue.

Sun Narin (Opposing site): I could not imagine how such incident happen on that day? People got jammed on the bridge and could not get out. Cambodia’s prime minister Hun Sen said that “Nobody will be punished for the incident.”

However, Sam Rainsy opposition party Son Chhay pushed the ruling government to identify the people responsible for “organizing the festival and handling the crowd” and wanted them to be fired from the position. This includes Phnom Penh governor, head of the police and interior ministry.

In my opinion, the government at least should take actions with those officials because they are irresponsible for their duty.

Phnom Penh municipality, relevant ministry and police did not perform their work responsibly and carefully. Why didn’t police facilitate the people’s crossing the bridge? There is not a lot of police force deploying at the incident place at that time.

Moreover, the bridge is for the exit only, why people were allowed to get in and out?  This is the reason causing the mass deaths. Why didn’t police deal with that problem?

Police could not help the victims urgently when the incident happened, keeping people stuck in the crowdedness more than 2 hours. This caused more people dead because of the suffocation in the stampede.

Finally, the organizing people don’t plan the ceremony well. They are not well-prepared to be ready for the unplanned incident. Comparing to other countries, when there is the some special event like that the government must guarantee that the safety for people. They are very careless about this.

I think this is the mass unprecedented deaths, so all these officials should be taken off from the position as the example for the other people.

Dara Saoyuth (Supporting site): Even though most Cambodians can think only who should be blamed when talking about tragedy on Koh Pich, to me, it is an opportunity to learn rather than focus on blame finding.

During the water festival, truck or big cars were not allowed to enter the city and even tuktuk couldn’t drive along riverside to avoid traffic jam and accident. I dared to say that Phnom Penh authorities were well-planned for the festival.

This year, people moved into the city more than the authority expectation, that in the evening of 22 November 2010, the accident happened. There are many reasons causing stampede including the lack of people morality that they push each other back and forth? Why should only authorities be blamed?

As we can see, immediately after the accident, the authorities were trying to help the victims in many ways.

The government ordered the Ministry of Health to pay much attention to the victims and also some officers to send dead people to their provinces with free of charge. The Phnom Penh Capital Hall also started reporting on the tragedy instantly and kept updating with new announcement related to the incident.

No one wants this to happen and also nothing can be changed. Now we should better find the solution instead of blaming.

One facebooker, Samsokrith Chhaly, urges the public to think of those who died during the Water Festival as heroes because they gave us priceless lesson for next year’s preparation. When development sides establish in Cambodia next time, I’m sure that they will think first about an effective risk management system.

After listening to both supporting and opposing sides, do you still think that government should be blamed for the tragedy? If yes, what can you get from that? I know that it is Cambodian habit to accuse each other when something bad happen, but I suggest you to be more positive by considering it as a lesson. Again, no one should be blamed. Critics should take the effective risk management system for considering rather than putting blame.

This concert was held on Koh Pech (Diamond Island) by a christian group. We, my friends and I, didn’t have plan to join; we just ride motors passed a mall and saw it by chance. The concert’s not too bad! Loud music and wonderful songs made the wonderful event…[slideshow]

The Victim's Grave / by: Dara Saoyuth 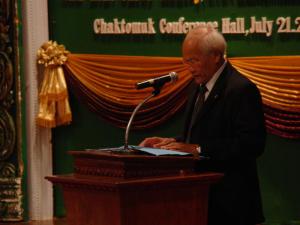 Chuch Phoeurn, Secretary of State, Ministry of Culture of Fine Arts giving a speech on "Cultural Exchanges between the U.S and Cambodia" / by: Dara Saoyuth

Dr. Franklin Huffman giving a presentation on Educational and Cultural exchanges between the U.S. and Cambodia / by: Koam Tivea 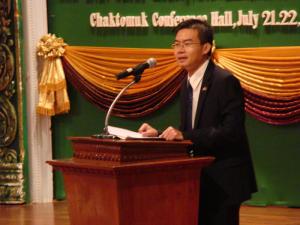 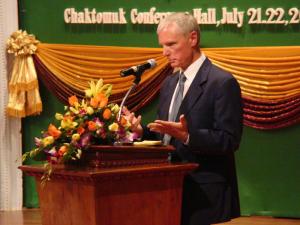 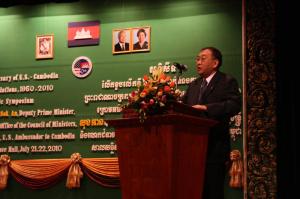