With sad faces and some even cry, S-21 victim's relative march to the monument which is built to remind about how cruel the Pol Pot regime is / by: Dara Saoyuth

A lot of Cambodians and foreigners whose parents or relatives were killed at Toul Sleng (S-21) gathered to celebrate a ceremony welcoming for the upcoming verdict which will be released on Monday, 26 July,2010.

Chum Sirath, First Deputy President of Ksem Ksan, a Victims Association of Democratic Kampucheea, read a letter dedicated to people who died at Toul Sleng. Bellow is the meaning from that letter:

Tomorrow, 26 July, 2010, the extraordinary Chambers in the Courts of  Cambodia will announce the verdict of Kaing Guek Eav alias Duch who was in charge of the notorious national torture center S-21. We call on the soul of our beloved brothers and sisters who have died in Toul Sleng and Cherng Ek after enduring unspeakable opportunities and who are now in after world to please come back and listen to the verdict in the hope that you, beloved brothers and sisters will finally receive justice. When you have heard the verdict, we pray for your soul to enjoy peace and happiness which was denied to you during your time on this earth. 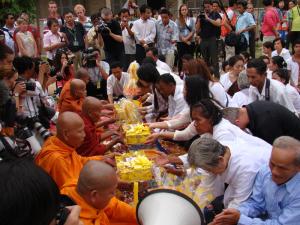 Victims' representatives give alms to monks dedicated to thier relatives who have been killed during Pol Pot Regime / by: Dara Saoyuth

Attendees bow down to the floor and salute monks pray for thier relatives who have died during Khmer Rouge Regime to live in peace and happiness / by: Dara Saoyuth

A monument in S-21 built to remind the next generation how cruel Pol Pot Regime is / by: Dara Saoyuth

An entire scene of the celebration looking from the 1st floor of a buidling in S-21 / by: Dara Saoyuth

A person who has relatives died at Toul Sleng cried when she remind about them / by: Dara Saoyuth

People with sad faces and some even cry when they remind about thier relatives who have been killed during Khmer Rouge Regime / by: Dara Saoyuth