Constructive Cambodian: The effect of wearing clothes of youth

I like to see them wearing short skirts, but I wouldn’t want my sister or my girlfriends to do it 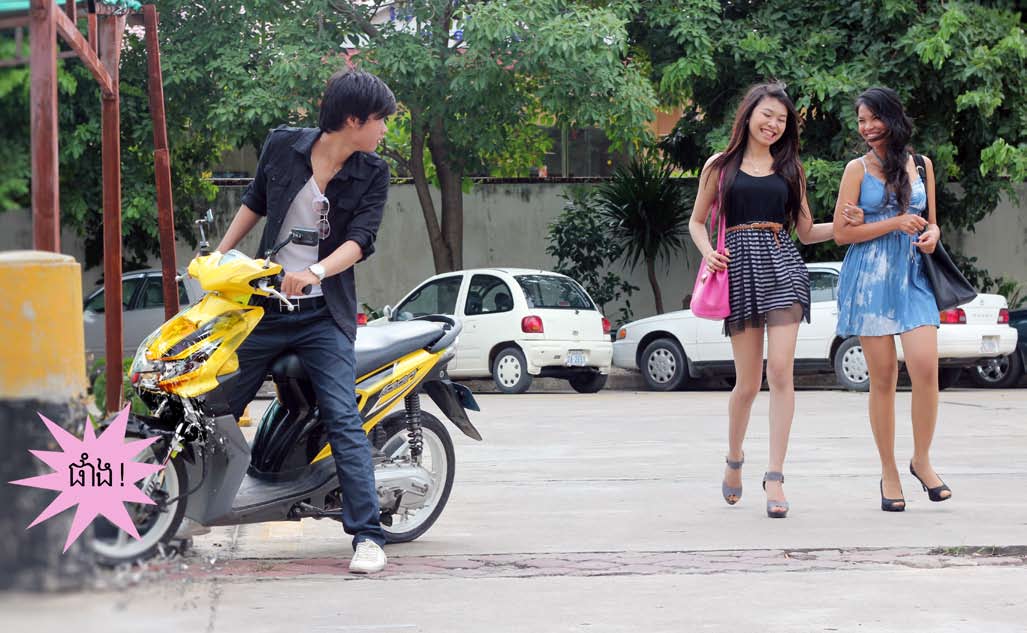 Clothing is used not only to stay warm and preserve privacy but can also be an expression of personal identity and national culture. For example, traditional Cambodian fashion choices helped define our culture of modesty: small shorts, short skirts, and revealing tops used not to be very common.

It’s now common to see young Cambodians wearing revealing clothes almost anywhere. Take a drive around the city, and you will see teens, some younger than 18, wearing very short, revealing skirts as if they couldn’t care less.

Even when going to school, some students would rather wear stylish shorts and skirts than obey formal Khmer student dress codes. Wearing these types of clothes can be thrilling and attention-getting, but can have negative consequences as well.

Female students wearing short skirts can distract male students, and even teachers, from doing their job, thus lowering the quality of education.

In an interview with the German press agency DPA, an English literature student said he had noticed many of his female classmates were wearing short skirts.

“We always turn back to see them,” he said. “I like to see them wearing short skirts, but I wouldn’t want my sister or my girlfriends to do it”.

On March 29, 2010, the Phnom Penh Post reported on a rally of more than 100 people who came out to urge Khmer women to dress more modestly. San Arun, secretary of state for the Ministry of Women’s Affairs, told the Post that: “Wearing short skirts and sexy clothes causes rape to occur, because all men, when they see white skin, immediately feel like having sex.”

Other voices would strongly disagree. Sim Socheata sent a letter to the Phnom Penh Post’s editor saying: “We are witnessing that women and girls are being blamed for being raped and sexually harassed for the kind of places they decide to go, the kind of dresses they decide to wear and the length of those dresses.

“Instead of calling for women to stop wearing short skirts, the Khmer Teachers Association could have marched against male perpetrators who rape women and girls, men who commit violence in the famil and male teachers who sexually harass their students.”

Still, there are other problems. It may sound funny, but wearing sexy clothing can cause traffic accidents. If they have the power to distract students in class, it is also highly possible that miniskirtwearing women could distract the attention of drivers on the road.

Besides these effects on other people, female students may elicit poor opinions of themselves by wearing lascivious garments.

In Bill Thourlby’s You Are What You Wear – The Key to Business Success, the author claims that when you walk into a room, even if no one there knows you, they will make 10 assumptions about you based solely on your appearance.

So, wearing clothing that fits properly with your situation is very important because, as they say, you don’t get a second chance to make a first impression.

For better or worse, people will determine who you are by the clothing and styles you choose. So if you’re a student, don’t dress like someone working in another career.

Media can be a powerful tool for promoting culture, but it can also be harmful because people, especially teenagers, will follow what they see projected in the media.

In 2000, Prime Minister Hun Sen banned pop stars in Cambodia from sporting short, sexy skirts when they appeared on television.

Quoted by Agence-France Presse (AFP), Hun Sen said: “These singers who like to wear sexy clothes look like they have not enough clothing. Don’t bring them on to TV, let them sing in nightclubs or restaurants. This is not Cambodian tradition, and we have our own rich traditions and culture.”

And even if lascivious performances have stopped on television, sexy photos of some stars still appear in local magazines.

Recently, Cambodians have become more active on the internet, including social networking sites such as Facebook. I’ve seen many teens upload sexy and scandalous pictures onto the internet.

To conclude, all I’d like to say is that only you can choose who you are going to be, and what you want others to think of you.

If you are a savvy shopper in Phnom Penh, you have likely encountered many shops that sell second-hand clothes. You are sure to find some great deals at these shops, located in markets or along the street, but it is quite obvious that you are having a gander at used goods. This is not the case at the new Sakura Japanese thrift store located on St. 271 not far from Chea Sim Samky high school in the capital.

The one floor shop is well designed, with clothes that are so stylish that you wouldn’t know they were used unless you looked at the sign on the way in that says “Sakura Used Japanese Products.” As the name suggests, all of the products are imported from Japan, and the shipments contain more than just clothes, you are likely to find a bunch of stuff from furniture to toys, accessories and appliances.

The shop is open from 10am to 10pm, and I strolled up during the early afternoon on my lunch break from my studies at university. I was surprised at how many cars and motor-bikes were parked outside and once I walked in I saw that most of them were driven by students, who were still in their uniforms, also taking advantage of their midday break for some budget shopping.

The store is well lit and fans keep the airflow going, however there is a certain smell that only comes from used clothes, and despite the aesthetic appeal of the threads at Sakura, the old clothes smell still required a brief period for acclimation. Once we got used to smell my friends and I were able to stroll up and down the aisles and focus on finding the true gems within the racks packed with clothes.

Looking at the prices of the goods on display, we noticed another differences from the second hand shops we were used to: there was a much wider variety of prices. Some things were only 1,000 riel while other prized-pieces cost over US$300. In general things were still way cheaper than they would be at Pencil or Sorya.

People seemed quite interested in the shoes and household items at the shop, but I noted few clothes being tried on. I suspect it is because of the overflow of sweaters in the shop, which most Cambodians would only buy if they were planning a trip to Japan or a place with a comparably cold climate.

A few things jumped out at me while we pursued the offerings at the second-hand shop. There was a pair of shoes that were beautiful and looked nothing like any footwear I had seen before. I think a tear might have streamed down my face when I tried them on and they were a bit too tight for my foot. There was also a gorgeous kitchen set complete with a tea pot, plates and cupboards. My friend was moved to buy a teapot for his father but the price proved prohibitive and he gently set it back on the shelf.

Near the end of our hour-long browse we noticed a room with a sign that said employees only. Inside were piles and piles of clothes, toys and hundreds of other objects that would soon be on sale. Some brave customers went in anyhow but their time was fleeting as staff members soon asked them to get out. I heard them muttering about how many attractive and cheap goods they saw in the forbidden room.

Sakura has just about everything you could want, especially if you have the time to look around for a while. If you are a style snob who only wears the newest brand name stuff, perhaps this isn’t your spot, but for everyone else, you owe it to yourself to at least stop by.