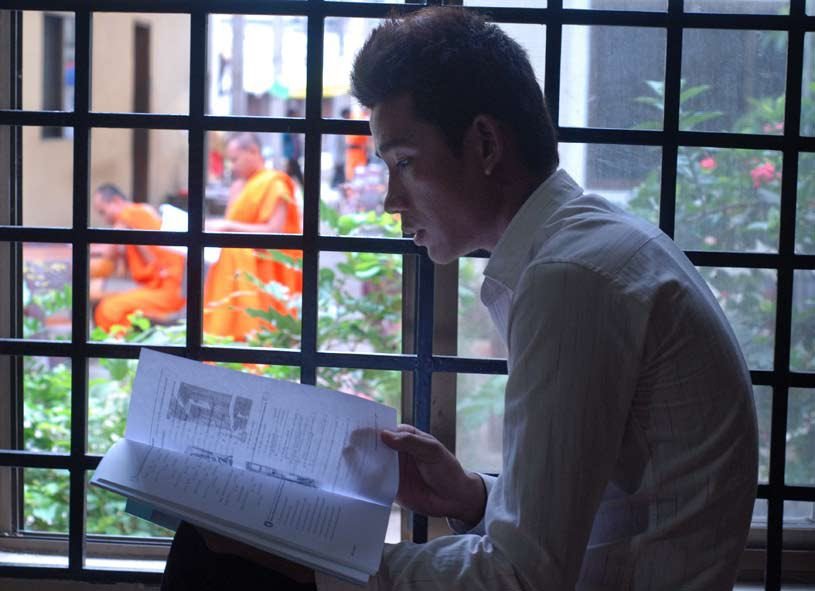 Living in a pagoda, an alternative to stay and study in Phnom Penh_original version

Below is a feature story focusing on the way of life of people living in pagoda. Here is the original version (not edited from any editor) I wrote with another LIFT reporter. The reason I decide to post the original version is that I don’t think the published version (already edited and cut) is fully covered as what we intended to do. 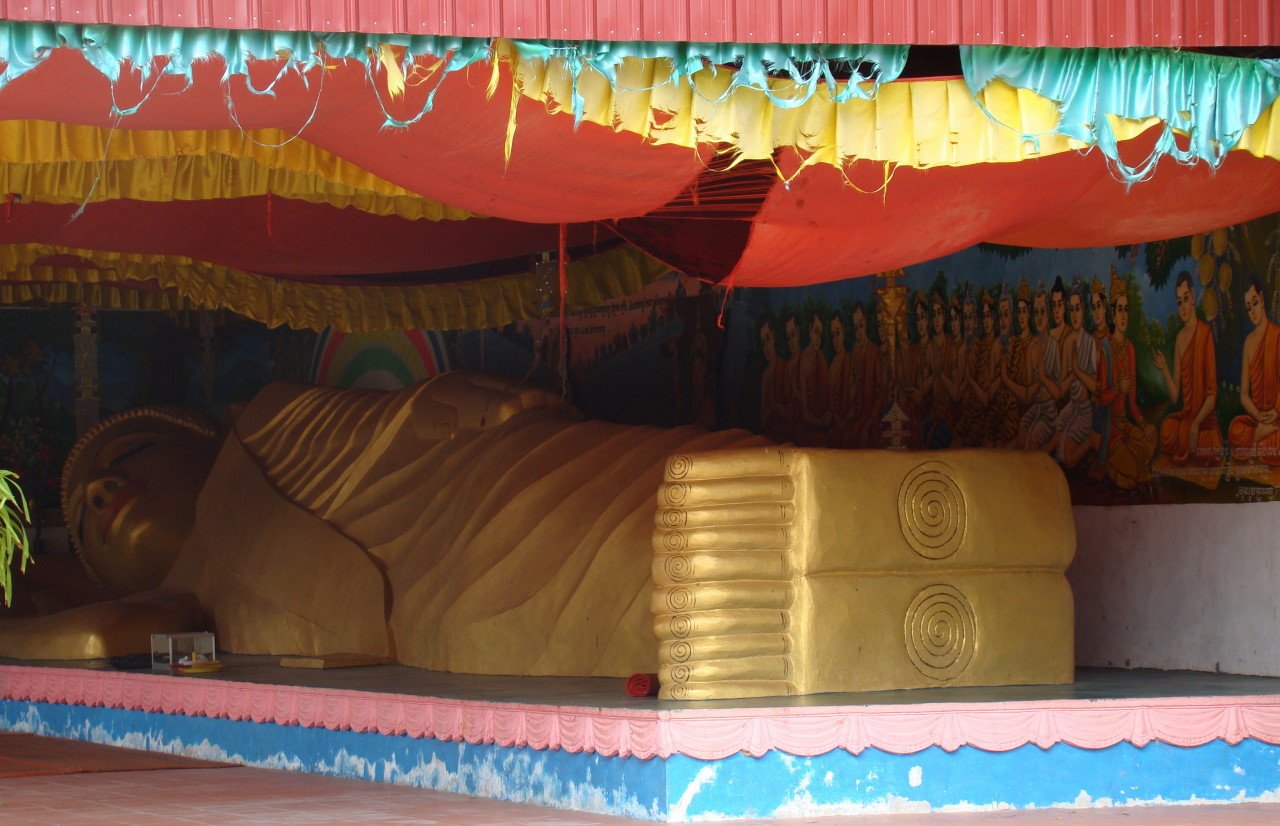 A Buddhist statue in Samrong Andet pagoda / by: Dara Saoyuth

It is smaller than half of the typical school classroom, about eight square meters. Equipped with two desktop computers on the desk just next to the broken window, one student was doing his homework while another entered the room searching for his clothes in the two old plastic closets opposite the computers. With separated bathroom, it is not different from other eight rooms in the monastery where four students squeeze together for shelter. As quiet as the other monastery, the monastery number ten stands on the west of the main entrance of Mahamuntrei pagoda, surrounded by a number of stupas.

From Kampong Speu province and hope to continue his higher education in university, Oem Vanna, age 25, has been living in the pagoda for more than three years. Walking out of his room in student’s uniform, he stated how he could get to stay in the pagoda.

“My parents asked for the permission in this pagoda two years before my high school graduation,” said Oeum Vanna, the first son born in a farmer family that has four children.

Oeum Vanna said that living in the pagoda has to adhere to the internal rule of the monastery for example he could not be out later than nine o’clock at night since monks will lock the gates for the safety of the others.

However, not every student who comes from the provinces has a chance to settle down at the pagodas in the city. “All students who were permitted to stay here have to be in good background and in poor living condition,” said Sao Oeun, head of the monastery in Mahamuntrei pagoda, where he controls a nine-room building.

He said everyday student who were able to live here has to be verified with no criminal record, good academic performance and behavior from the village chief or school principal, explaining that he did not want the trouble makers to stay in the Buddhist area, and this would also disturb to the live of other students in the monastery.

Since the priority to be in the pagoda was given to monks at the provinces who hopes to change their pagodas for some reasons, the remaining available space keeps for students from the rural areas. “There are not many rooms for all students who want to be in the Phnom Penh, but at least we can help some of them,” said the head of the monastery.

Mahamuntrei pagoda is not the only place where students can ask for accommodation while they transfer their study to the city. In Sangkat Phnom Penh Thmey just outside Phnom Penh, Samrong Andet pagoda is one of the pagodas that can accept much more students than others. Since 1993, students have been accepted to stay in pagoda and so far, there are thousands of them who used to stay there while another more than two hundred students are staying in the pagoda for free of charge.

Ra Son, one among the four monks who are responsible in taking control of pagoda boys, said that the pagoda has around one hundred rooms varying from small to large rooms for students to stay, and the number of students in each room depends on the room’s size which normally two people in a small room and four people in a large room.

By just selecting students based on face-to-face meeting and reading their background from official papers they hand in, not all students being selected are good, and as a result, some of them commit offense upon living in pagoda.

“Some students have committed offenses because people are not perfect all the time,” said Ra Son; adding that if it is just a small offense, he would advise them not to do that again. But if it is rather big, he would ask their parents to come and talk, and if it is a big offense like criminal behavior, he would send them to authority in charged.

In Samrong Andet pagoda, students have to wake up and join a prayer program with monks about half an hour every morning starting from 5:35. “We not only call them to pray, but the other four monks and me take turn to educate all of them each morning, especially on how to behave well in the society,” said Ra Son.

Pagoda Students do not have to pay for monthly rented fees and even can have free meals as well as getting education from monks. Even though pagodas seem to be a good place for poor students who apt for education in the city, they are not meant as permanent accommodations.

Oem Vanna who has been living in Mahamuntrei pagoda for almost four years said that he had planned to leave pagoda and rented a room when his younger brother finished high school and came to Phnom Penh.

“When I first arrived in the city, pagoda was the only place for me because I do not have any money to rent a room, but now I got a job and at least can afford it, so i think that I should give opportunity for some other students from provinces to pursue their education.”