It might be a surprise for LIFT fans to know that our editor, Colin Meyn, has just resigned from his work after finishing his contract with the Phnom Penh Post. However, I’d better not say that he resigned because he told me that he could not renew his contract though he still loves working there.

It’s a bit hard for me to accept this fact because I always appreciate his contribution to LIFT and I’d say that “without Colin is without LIFT today”. I dare to say that no one else know well about the development and improvement of LIFT magazine besides from Colin Meyn, Tivea Koam, and me because we used to work with each other very closely and conduct plenty of meetings to improve our magazine quality.

LIFT magazine is an educational supplement of the Phnom Penh Post for Cambodian youth. 1st issue of LIFT  was published on January 6, 2009, and so far, there are 72 issues of LIFT.

This post is written to remind me of good memories I have with my beloved editor, to address his involvement in LIFT, and also my contribution to this magazine. Hope to receive some comments from my dear readers after you guys finish reading this opinion piece…

My involvement  in LIFT magazine 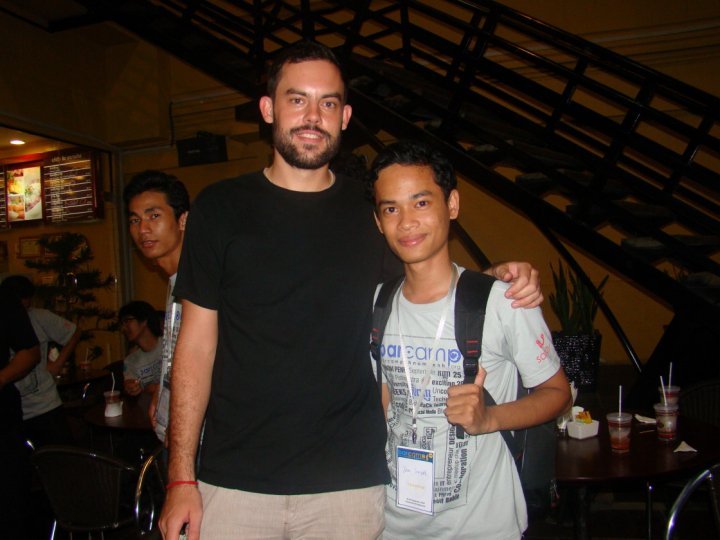 My editor and I when joining barcamp 2010

June 2, 2010 is the first time I had chance to have an article published in LIFT magazine, but actually, I have involved in LIFT a bit early than that by joining its’ weekly newsroom meeting.

I can still remember that at that time, I don’t know much about how to write an article so I made a lot of mistakes in writing and Colin edited most of what I’ve sent to him. I was only a normal contributor to LIFT and in some issues, I didn’t even have my name in writers and reporters list. I used to be very disappointed once and a bit envy with some of my friends who had their names published at that time, so I sent a short mail to Colin saying that I will struggle to get my name in the list and you know what his reply is? He said that it’s just my beginning and if I keep holding this commitment, he assured that one day, my name will appear on the list.

From that day, I’ve committed to get byline by working hard, and trying to improve my writing and professionalism. Every single idea I came up, I would raise it to Colin to get some suggestions from him.

If I’m not wrong, about 3 weeks later, I got my name published on LIFT magazine. I was very happy at that time, and I guess this feeling is true for every reporter who has their article published for the first time.  I bought a copy of it to keep until today and even called to my mum in Kampot province to buy a newspaper because her son’s name was on it.

I keep doing my best for LIFT and as a result, a few months later Tivea and I were promoted to be deputy editors, so we start working to help other writers producing good stories by giving them suggestions to their story angles as well as commenting on their writings.

At that time, I was doing my internship with Agence-France Presse (AFP), so I was very happy since I can use what I’ve learnt from an international news agency to help improving LIFT magazine. I have tried my best to contribute to LIFT and have received a lot of feedbacks from Colin in term of writing, interviewing, and organizing a magazine. I even learn some layout design from him. That’s when I know a lot about complex structures in a newsroom.

Later, Tivea and I start having our name put into senior writers list, so it means that we are eligible to write opinion piece in Constructive Cambodian section. So far, I’ve written two of them: Why traffic jam exists in Cambodia? and Getting passport in Cambodia.

Now, I am still a senior writer for LIFT magazine, but I don’t know what the future is. I believe that some structures will be changed after Colin left; however, I am still happy to contribute what I’ve if they still need me.

Please stay tune because I have two more points to write about: Colin Meyn involvement in developing LIFT magazine + My memories with my beloved editor… I’m thinking of updating this post or create another post for these two points… Thanks for reading my opinion piece...