Meeting Cambodian politicians on the internet 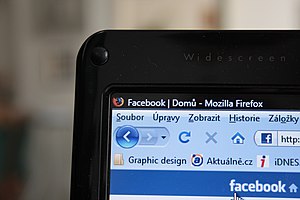 Picture of notebook screen with Facebook / Image via Wikipedia

The internet has turned the world into a global village where people from different places can get to know each other and gain easy access to information, and this has prompted some Cambodian political parties to make their web presence known to reach a much bigger audience.

In most cases, these websites contain information such as political background, principles, activities and party contacts and are readily available on each party’s official website.

The Cambodian People’s Party, the current ruling party in the Kingdom, has its own website in both English and Khmer.

Cheam Yeap, spokesperson for the CPP, said having an official website can help people connect with political parties and learn about its background.

The internet has played a crucial role in delivering accurate news to Cambodians, said Yim Sovann, a spokesperson for the opposition Sam Rainsy Party.  This was the main reason the SRP launched a website in 2000.

“The internet has helped us get a lot of support, especially from activists and people living abroad,” he said.  “It’s a means to deliver truthful information by uploading documents and promoting our activities on our website.”

We are now living in a world of electronic democracy where people can communicate directly with their leaders using the internet. Therefore, a website on its own isn’t enough; some politicians have started to engage in social networking sites like Facebook and Twitter to promote their political parties and expose themselves to a young, interested audiences.

There aren’t any official studies, but any young person can confirm that Facebook is one of the most popular social media outlets in Cambodia and it is used in different ways depending on the person. Everything from normal communications to political discussions to multi-user video games take place on the site. Many of the political parties have pages on Facebook, where they post updated party news and get instant feedback when people click on the “like” icon to show their agreement or post a comment if the like button doesn’t express their feelings.

The Human Rights Party has had a website since they formed in July 2007. The next year they won 6.62 percent of the votes in national elections. The party stepped up their online engagement by creating a Facebook page last year. In Cambodia, HRP leaders said that programmes on radio FM105 were the best way to reach people, but in order to reach supporters abroad, the internet is invaluable.

“The HRP depends completely on the internet in order to communicate with people who live abroad,” said Kem Sokha, the HRP president.

Khieu Kanharith, the government’s Minister of Information, said he had used Facebook for two years and before that he used several other social networks including hi5.   His online savvy is obvious since he usually replies to online messages within a few days if not a few hours. Yet he is not a complete convert of online communication.

“I think oral communication works better than comments via social networks,” he said.  “On Facebook, we cannot post everything – for example, policies that contain thousands of words cannot be condensed to two or three sentences. That is simply not enough to promote a policy.”

Sites like Facebook also provide a space for people to distribute false or damaging information without censorship or accountability. If  someone is offended by something online, they can easily return the insult by posting messages on walls or message boards. Lift asked Khieu Kanharith if such threats have concerned him in  more than two years of participating in similar forums. He said he’s not worried since people can differentiate real and fake information.

Nil Vandeth, a 19-year-old student at the Royal University of Law and Economics, has used Facebook to have his ideas heard and comment on other people’s inspirations.

“Politics is part of our general knowledge and people will know more about it when they start sharing their ideas,” he said. Cambodian people, particularly the young, are starting to take an interest in politics, he added, “because of the internet”.

By: Dara Saoyuth, Sothea Ines and Ouk Elita
This article was published on Lift, Issue 45 published on November 17, 2010
You can also read the article on Phnom Penh Post website by CLICKING HERE