I’ve spent around 2 hours walking along riverside this morning to take some photos and make it into a photo story for my photojournalism class. I ended up with shooting a “Grapefruit Sellers” after trying many different subjects. Four photos accompanied by some descriptions below is what I handed to my teacher and I would like to share this with all STUDENT BLOG visitors here. Cheers, 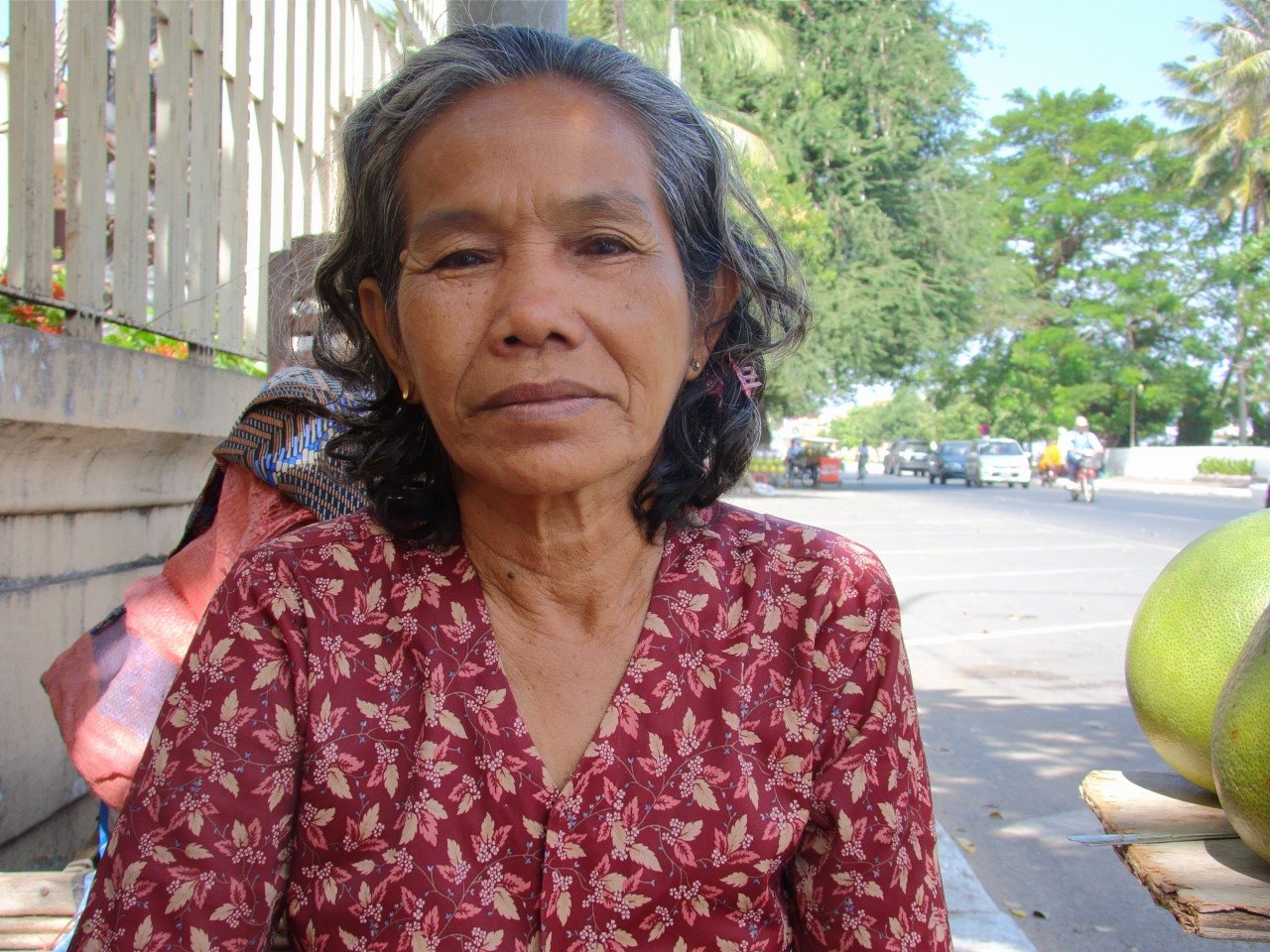 Chan Sokhan, 62, comes from Kandal province to live in Phnom Penh an has worked as a grapefruits seller since 1983. Every 1 week to 2 weeks, there is a person taking grapefruits from Kampong Cham for her to sell. / By: Dara Saoyuth 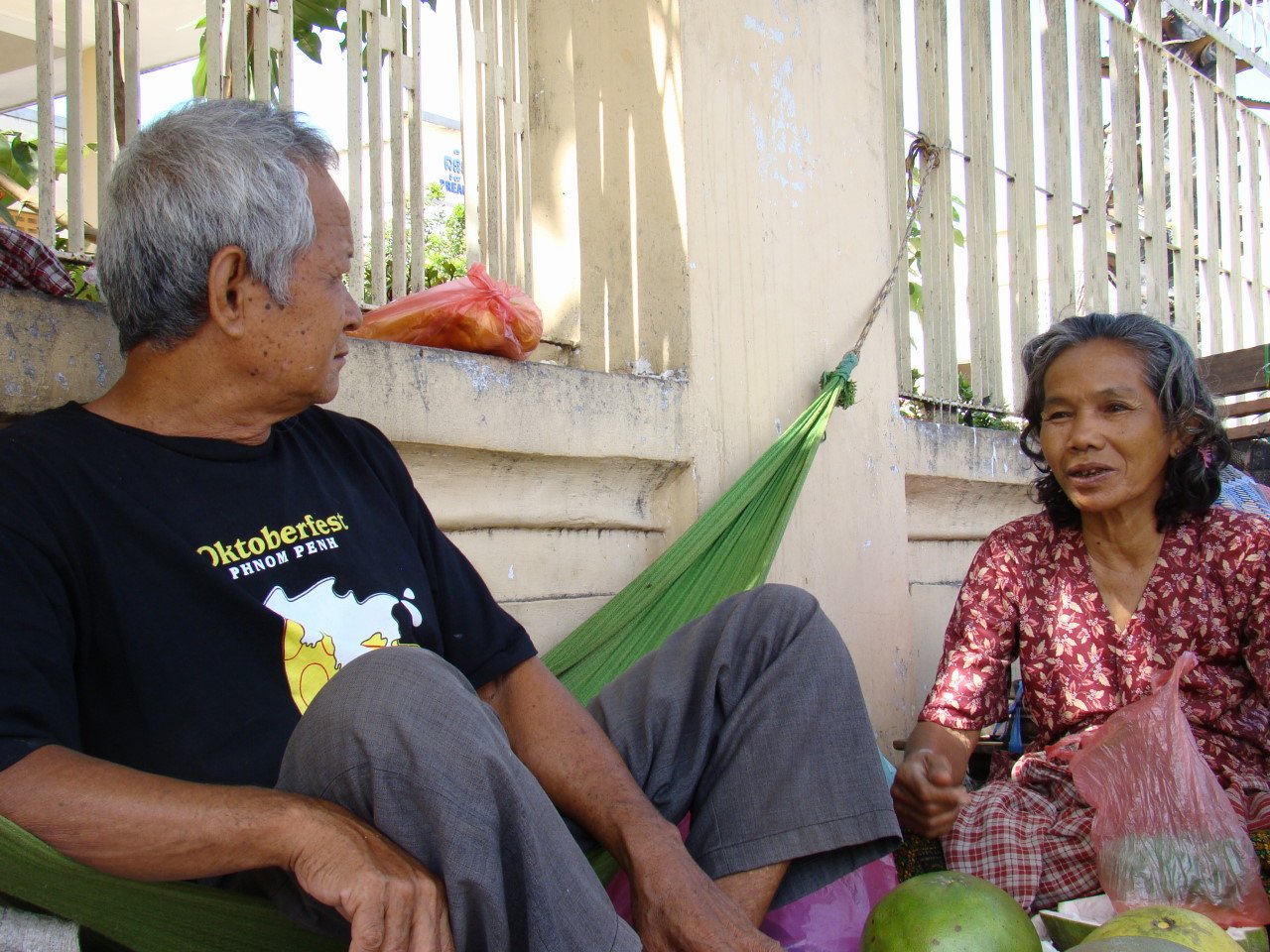 She doesn’t sell alone. Normally, her husband, Kham Sokhorn, stays with her from the start until time they go back home. They work around 12 hours a day starting approximately from 8am until 8pm. / By: Dara Saoyuth

They have to pay 500 riels per day to police to be able to sell in front of Chaktomuk theatre on the pavement where they use as the place for resting, having lunch and dinner. / By: Dara Saoyuth 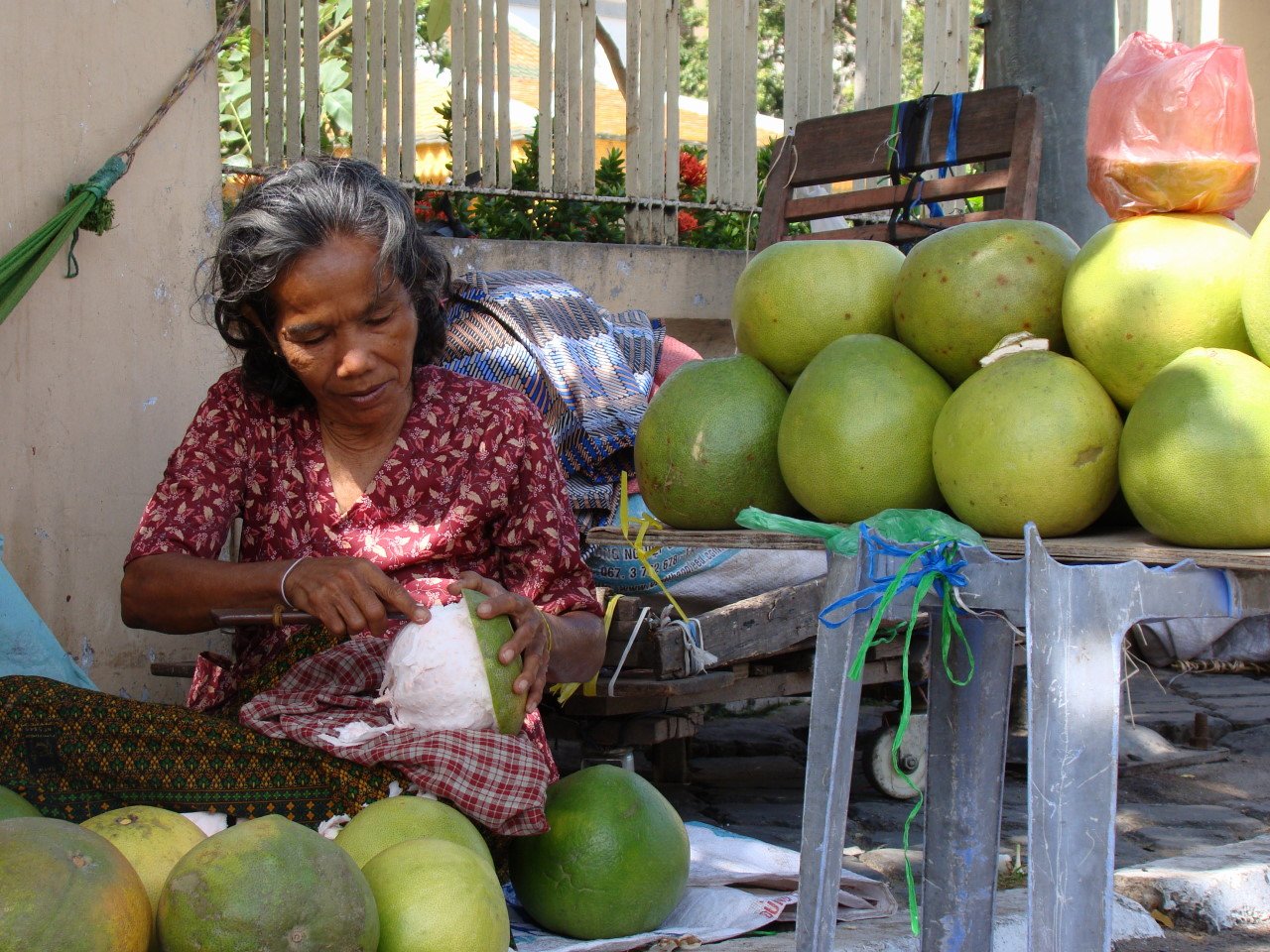 When there is nothing to do, Chan Sokhan peel grapefruits skin ready to sell to customers. "Though I cannot get much from selling grapefruits, I want to live on my own rather than asking for money from my children." / By: Dara Saoyuth

I had spent around two hours joining the closing ceremony of the 1st Cambodia International Film Festival (CIFF) at Chaktomuk Theatre and I was lucky to bring my own camera with me tonight to shoot some photos for my blog visitors. SO don’t forget to scroll your mouse pointer down to see those photos including one short video clip.

At the spot, there was a presence of  HE Him Chhey Em, Minister of Culture and Fine Arts, government officials, famous film directors, actors, celebrities, and hundreds of Cambodian and foreign audiences.

After the end of closing ceremony, there was also a concert outside the hall by The Cambodian Space Project (below, you can watch a short video clip I took tonight).

This year is marked the 1st annual Cambodia International Film Festival, which was opened Wednesday, 20 October, at Chaktomuk Theatre and had been closed just a few hours ago.

During the festival, more than 100 international and Khmer productions were screened at six venues throughout Phnom Penh, such as Lux Cinema, Chenla Theatre, Bophana Center and Le Cinema at Centre Culturel Français (CCF); public outdoor screenings are at Golden Sorya Market and Diamond Island.

The last day for the Cambodian Youth Art Festival 2010

Audiences both Cambodians and foreigners were crammed into Chaktomuk hall tonight so that some of them have to stand even though they had ticket for their seats. Today’s the last day for the 5 day celebration of the Cambodian Youth Arts Festival 2010 (CYAF). The performances at the main stage this afternoon are: 1. Contemporary dance “Future Flight” by Epic Arts; 2. Pop Song by Pou Khlaing; 3. Innovative Mohaori Song by Meng Keo Pechta 4. Chapei dang Weng by Master Suon San; 5. Classical Dance “Glass Box” by Khmer Arts; 6. Large Shadow Puppet “Sa Neakabas” performed collaboratively by Wat Bo Troupe, Sala Kansaeng Troupe, Kok Thlok Association for Artists, and Sovanna Phum Arts Association; 7. New Dance “Motanak Pheap Cheat Khmer” by Association for Conservation of Arts and Culture; 8. Hip Hop Dance by Tiny Toones; 9. Folk Dance “Chhaiyam” by Children of Bassac. Note: Some audios and photos of the event for today will upload soon for my dear visitors.

Tomorrow will be the last day for the Cambodian Youth Arts Festival 2010, which is planed to celebrate for 5 days started from 07th August, 2010. I am happy to have spent around 3 hours tonight at Chaktumuk theater since there are lots of fantastic performances. The performances at the main stage this afternoon are : 1. Spoken Theater “The Tear of a Victimized Woman” by Fine Arts Association; 2. Folk Dance “White Dove Dance” by Mith Samlanh; 3. Pop Song by Soh Mach and Him Sivon; 4. Yike Opera “Nesai Snae Chab Cheap Kabas” by Khi Mom’s troupe. NOTE:Some parts of songs sang by Soh Mach and Him Sivon are uploaded for my dear visitors. I also include some parts from Yike Opera by Khi Mom’s troupe as well. Cheers,

Sunday, July 18, 2010 marks the starting day of celebrating 60th Anniversary of Diplomatic Relations, Cambodia – United States. For this first day, at Chaktomuk Concert Hall, there is a concert by The 46-member Pacific Fleet U.S. Navy Band who performs a variety of music including military marches, classical, and contemporary.

For the Cambodian side, we have several chapei dong veng (a Cambodian two-stringed, long-necked guitar) performers and members of the Royal Cambodian Armed Forces band.