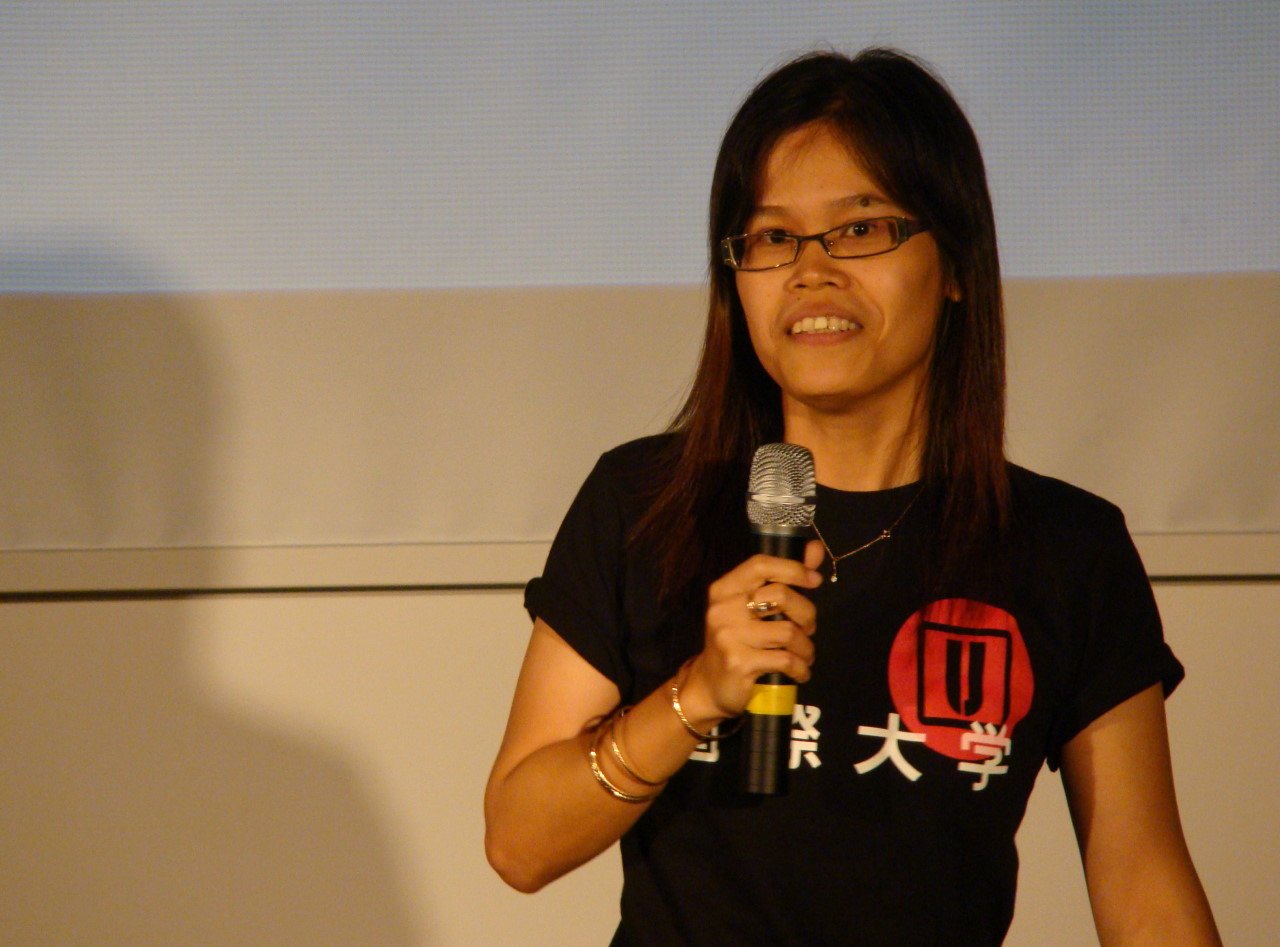 Chak Sopheap present her life experiences to the audience / by: Dara Saoyuth

Now I am at Zaman University joining KhmerTalks, a sharing conference aimed to unite emerging entrepreneurs and like-minded individuals to share and work collaboratively to shape dreams into action.

Under the theme “Sharing Success Together”, KhmerTalks has brought 10 speakers and two performing artists to share their achievements, experiences, and to light up the entire conference hall with 250 attendees from various backgrounds.

KhmerTalks is an event follow the same styles as TEDxPhnomPenh, which was hosted in Phnom Penh in January this year.

The event is organized by the Khmer Young Entrepreneurs (KYE), a growing nationwide group of young emerging Cambodian social and business leaders who believe in personal empowerment, sharing, and working cooperatively.

All in all, I would say that both events are great and significant in term of opportunities that Cambodian successful can get to share with local and international audiences. 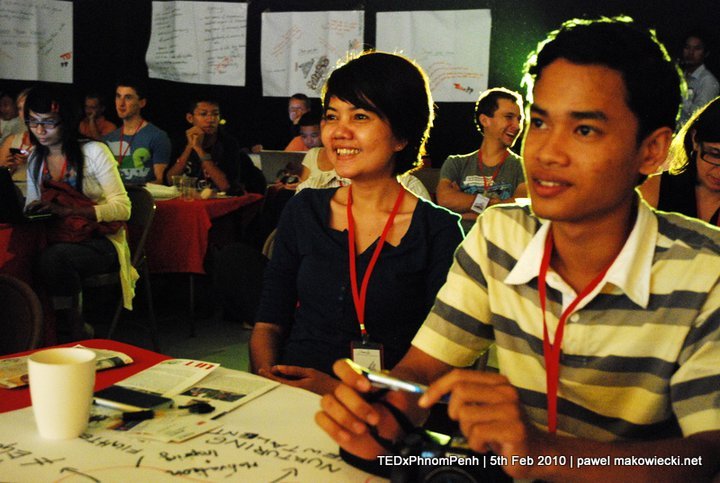 I was very lucky to be one among the 150 people who had the chance to join the first TEDxPhnomPenh. I arrived at the event some time before it started, spotted some people I knew and we enjoyed chatting while waiting for the auditorium doors to open.

Then it was time! An event organiser announced some rules we should know because the presentations would be live streaming to people around the world and I felt a bit nervous to hear them say that everyone should choose to sit at a table with people they hadn’t known before. The reason for this was that they wanted us to get to know different people and share ideas after each session of the presentations.

A few minutes later, the people at my table were not strangers any more. We started sharing basic information including our names, where we were from and so forth.

Kung Nai, a Chapei Master, and Keeda Oikawa, a live painter and illustrator, came together to show their talents at playing Chapei and painting as a welcome addition to the event. After that, 12 presenters came on stage one after another to present their topics.

Even though it was a mix between Cambodian and foreign presenters, to me all the presentations were great. I can see very little difference between these two types of presenters, apart from the use of English. I felt that some Cambodian presenters could not show their full potential because of a lack of English skills. However, they all managed to keep it interesting, convincing and they inspired me through their expressions and meaningful content.

If I was asked to choose my top two Cambodian presenters, Kounila Keo and Phloeun Prim would be my choices. As the author of the Blue Lady Blog, Kounila presented the topic “Blogging: The New generation of Cambodia”. Blogs are also my favourite things to read in my free time. Putting a few letters, but big and mostly fun pictures, made me easily catch and remember the points she made. With her clear explanation and convincing voice, I decided to choose her as my first choice.

As a Cambodian who was raised in Canada from the age of three, Phloeun Prim was my second choice of the most convincing speaker. He didn’t focus much on the slides he showed, but used his facial expressions combined with his great intonation which nearly made me cry as he started narrating his own story from childhood. He made it very clear about why he loves Khmer art and culture and why we should try to protect it.

If there is another chance in the future, I would love to go to this event again. 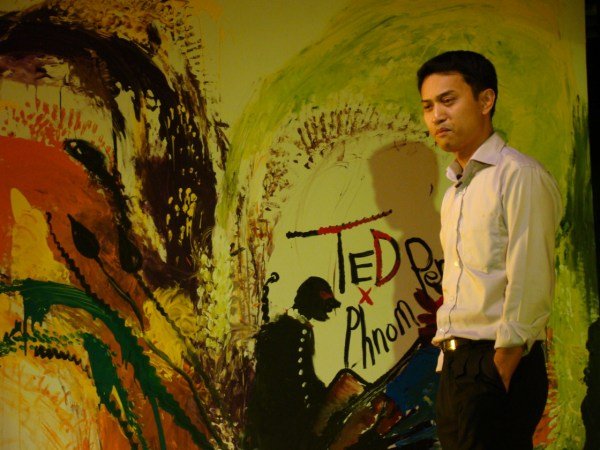 Building the Future” was the theme for TEDxPhnom Penh, which was held last Saturday. Since there was going to be many great people who would be really amazing for me to meet and talk with, I would have felt very regretful if I missed the event.  However, I was fortunate enough to get the chance to join in.

TEDxPhnom Penh brought both Cambodian and foreign speakers from different backgrounds together – artists, social entrepreneurs, filmmakers, bloggers, human rights activists and software developers – who had interesting experiences in life and wonderful ideas to share on the stage with a passionate audience.

While I was part of the audience at the event, I could see most of the speakers were really energetic and inspiring in presenting their great perspectives for how we could build the future of Cambodia and the world and how individuals could contribute to development and peace around the globe.

Some speakers made me laugh, some made me think critically about their topics, some aroused my emotions on what they were talking about and some made me thoughtful. I can say that the topics which were presented during the event were undeniably motivated and beneficial to me as a part of the audience.

Though some speakers like Kounila Keo, Sithen Sum and Phloeun Prim were Cambodians, they provided interesting presentations with global visions for the development of Cambodians. However, the topic that impressed me the most was “Midlife Crisis”, presented by Mike Rios. It was so compelling to me, for he gave a charming and humourous presentation, but he also gave me an idea that I had not thought of.

He showed the evils of some advertising he had done, which made people think of being cool and awesome if they possessed those advertised goods, and then explained what made him quit his job and his push to use advertising for a better way of life for people. He said that sometimes people do not even know they inspire others to achieve what they want, and that people were interdependent, with one inspiring another. That really pushed me to think more of what I am doing and what I have to do to better my life and my country.

Chris Brown, a software developer, talked about how to fail in business by focusing on customers first rather than moving straight to product-focused issues, which gave me more ideas about to how to start a business successfully.

Colin Wright’s talk on “Extreme Lifestyle Experiments” gave me another taste of life, on how to make positive change to lives. Chris Noble’s presentation of “From Little Things, Big Things Grow” did inspire me to feel that the small thing I did today can make a bigger change tomorrow.

Besides gaining knowledge from the speakers, I was really delighted to share my ideas with the people at my table and get more ideas from the discussion sessions which TEDxPhnom Penh provided.

I am so proud that I took part in TEDxPhnom Penh for the first time and it went so successfully, but what I think they could do to make it better would be to have more speakers so I could learn more from them.

I can say this is the greatest event I have joined in so far and I would love to engage myself more in such events with the hope of knowing more people, sharing ideas worth spreading and listening to meaningful, motivating and fascinating presentations demonstrated by passionate speakers, both local and international. I do hope we will have TEDxPhnom Penh next year, but with more speakers.

By: Dara Saoyuth & Koam Tivea
This article was publish on LIFT, Issue 57 published on February 09, 2011