The Students talent exhibition of Faculty of Fine Arts 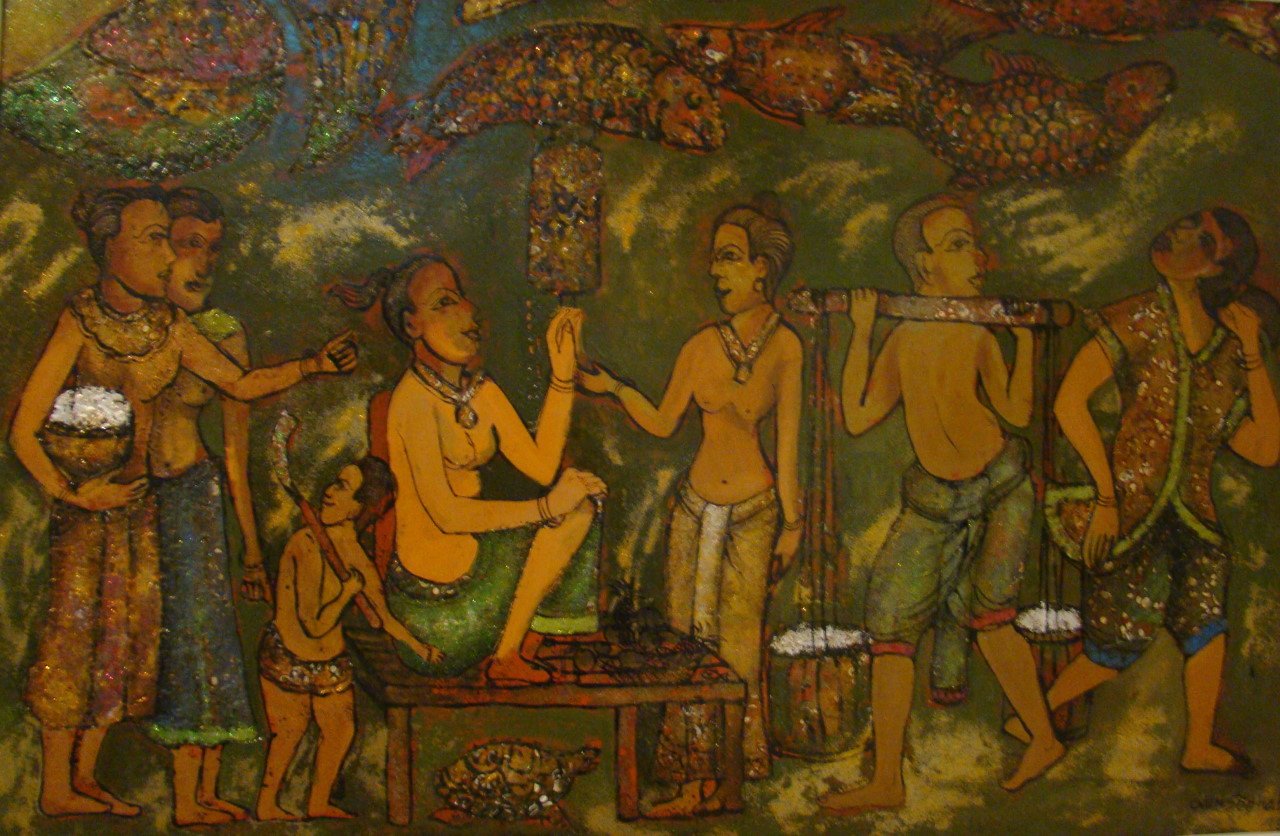 Artwork of student of Faculty of Fine Arts / by: Dara Saoyuth

It’s 5:30 in the afternoon of Thursday, February 17, and hundreds of people are milling around on street 178, looking in a building as if they are waiting for something to happen.

It is neither a coup nor a protest – the people are there for the opening ceremony of the largest exhibition ever which organized by the Royal University of Fine Arts.

The program hasn’t started yet, so public are not allowed to go inside the university exhibition hall except the Cambodian Minister of Culture and Fine Arts Him Chhem, some journalists, and some dignitaries.

An event organizer recognized me in the crowd outside the building and invited to enter with some other journalists.

The building that is mostly empty and silent is now filled with 198 pieces of artworks in various forms including paintings, drawings, sculptures, bronze-castings, photography, and interior design projects produced by graduate and undergraduate students at RUFA.

The students talent exhibition of Faculty of Fine Arts is the first student graduate student show since the 1960s and its main goal is to give the students the opportunity to present their creative works to a broader audience.

I start walking from one end to the other end of the room, entering every room along the corridor since there are artworks everywhere, even on the walls along the passage. Even though I don’t have much knowledge about art, I have a look at every single piece of art because they are so beautiful.

About 30 minutes later, the formal ceremony starts when the Minister of Culture cuts the symbolic ribbon following a speech by the university’s rector and some remarks by the minister.

The program lasted for about half an hour, but it was hard for me to pay attention to the speeches because the hall was so stuffy. There was also some noise from outside as people there kept talking loudly.

In his remarks, the Minister of Culture said he appreciated the students’ efforts producing these works of art and this exhibition shared the national policy under the slogan “Cambodia, Kingdom of Culture”.

As soon as the speeches ended, people standing outside start squeezing into the building. It was a mix of Cambodians and foreigners. I felt packed into the building and it was getting stuffy since there was no air-conditioning, only some ceiling fans.

I began to feel hungry and wanted to leave the hall, but when I saw more people were coming in, I decided to stay there to see how the audience reacted to the artworks. I was standing against the wall, observing all the activities and surprisingly a young lady, with a snack and drink on a large plat, come to offer me some. I realized that she was a volunteer at the event, so she had to make sure the audience had something to eat and drink. Everyone in the room also enjoyed eating and drinking with their eyes still focused on the students’ achievements.

Seng Vesal, 23, is a senior student majoring in painting at RUFA and had 12 pieces exhibited in the event. Seng Visal said he was very happy since it was the first time he had his work exhibited. “Students will try to compete against each other to make their work available to show to the public,” said Seng Visal.

If you haven’t seen the exhibition, don’t be worry because it will be on display permanently.